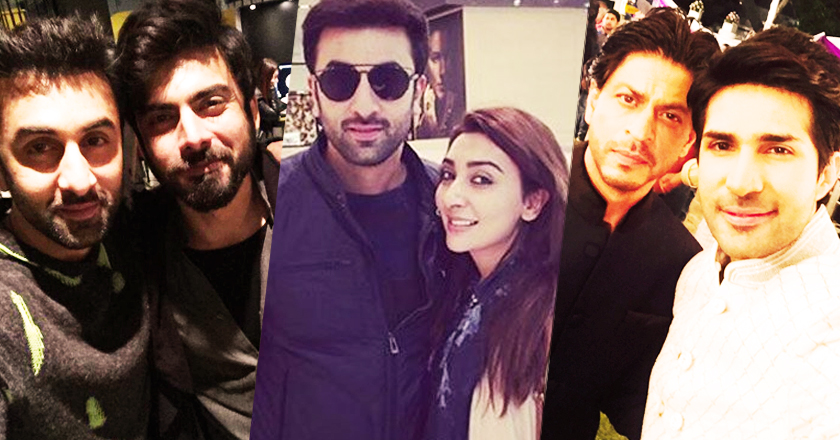 Pakistani celebrities love to meet their Indian counterparts and when they get together they make sure the moments do not remain un-captured. Here are 14 times Pakistani stars are seen taking candid shots with Bollywood artists.

Have a look at them below:

With this guy 😏 Have to admit, was pretty starstruck, and so warming to know how humble and gracious he is. One of my fav Indian leading men. Thanks Malika!!! #ranbirkapoor #london #starstruck #ranbir #likeforlike #followme #onsetwithranbir #happyfeet #goofyphotos #bollywood #bollywoodstar #actors #lovefilms #filmstar #indianfilmstar #selfie #selfiesunday #loveselfies

2. Neelam Muneer poses with Kareena Kapoor in Abu Dhabi where the Bollywood starlet was promoting a jewelry brand

3. The beautiful actress Ayesha Khan was pleased to meet Ranbir Kapoor and Katrina Kaif during her UK tour Here is another pictures of Fawad with Karan Johar & Ranveer Singh at the IIFA Awards!

View some of the other pictures of our Pakistani heartthrob with Sidharth Malhotra, Kareena Kapoor, Ali Bhatt & Sonam Kapoor. 6. Oscar winner Sharmeen Obaid Chinoy revealed her love for Madhuri Dixit as she took a picture with her at the Women in the World New Delhi Summit

8. Humamia Malik parties with Varun Dhawan & other celebs in Dubai

#Repost @siddysays with @repostapp. ・・・ EXCLUSIVE..Humaima knows how to throw a party. And it gets better as #VarunDhavan joins in. Ok guys we are off to Dubai. 11. Seems like Ali Zafar is quite popular with the Bollywood celebrities! 12. The Pakistani Singer Turned Actor Adeel Chaudhry Clicked a Selfie with Shahrukh Khan & the Big B. of Bollywood Amitabh Bachchan 17. Mahira Khan & Ali Zafar rocking it at a Bollywood party!