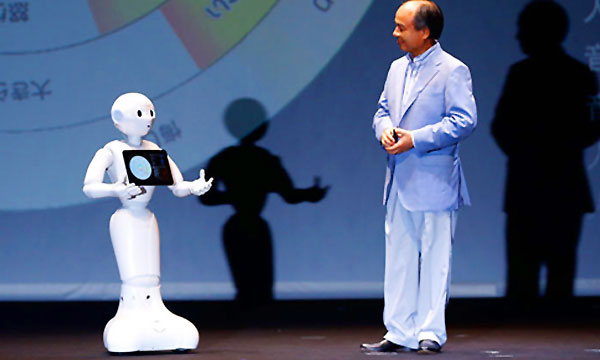 The world’s first cloud-based, emotion-sensing humanoid robot, known as Pepper, went on sale in Japan on Saturday and immediately sold the 1,000 available units in one minute.

This particular robot, designed by robotics group Aldebaran for SoftBank, has been created to interact with humans and also to live with them permanently.

Pepper, the robot with a heart (if you can consider a combination of metal, silicon, and plastic a heart), weighing about 61 pounds and standing at four feet, has a humanoid face and a screen on its chest.

It has been designed to communicate with humans using his ‘senses’ of speech and touch. It has the built-in sensors that give it the ability to examine facial expressions, body language and words, and alter its behavior and to get in-line with the person it is interacting with. Pepper runs on lithium-ion batteries, that last about 12 hours and comes at a price of 198,000 Yen (which is equivalent to a little over $1600).

SoftBank, in earlier June, had announced that 1,000 units of Pepper would be made available in Japan only. The organization’s CEO, Masayoshi Son, said at a recent event that the company would not aim to make a profit on Pepper for at least four years, as it costs more to manufacture than what they would sell it for. Speaking about the scope of growth of this robot, Son was quoted as saying,

“Pepper will become smarter every day by itself. Hundreds of thousands, million of Peppers in the future will teach each other and learn from each other simultaneously.

Our goal at Aldebaran is to create robots for the well-being of humans, kind robots living with humans as a new artificial species. In order to realise this dream, it’s not enough to simply have Pepper working at SoftBank stores. The ultimate goal is for Pepper to live with humans, the stores are just the beginning…

The introduction of this robot marks a significant step in the right direction for the robot manufacturing industries.

What are your thoughts on Pepper? Have your say in the comments below.