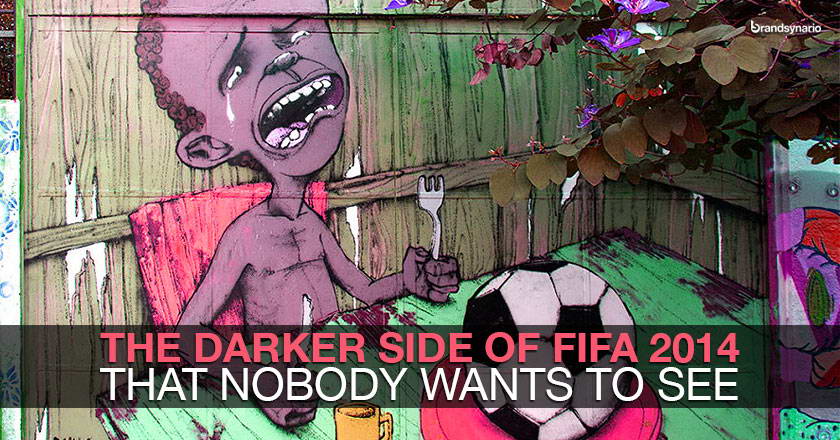 FIFA 2014 is almost nearing its end and the fans all over the world are engrossed in watching the matches -some feeling dejected and some feeling overjoyed.

With an investment of $11 Biillion by the Brazilian government the organisers would be earning huge profits from the game but there is a bitter reality that lurks in the very country hosting it.

Brazil, the host of FIFA 2014 does not come under developed countries and although it is hosting one of the grandest events, it appeared that the masses did not welcome the idea of hosting the World Cup; rather 61% clearly disapproved of it according to a Pew Pol.

Following ten images are the proof of the crude reality of FIFA 2014 that is simply being ignored:

1. One of the very famous murals by the Brazilian street artist Paulo Ito shows how the poor who are not even getting food would severely suffer due to the World Cup.

2. These make-shift tents in Sao Paulo accommodate about 1,500 people from “Workers Without a Roof Movement”, which raises its voice against the deprivation of affordable residential areas.

Brazilian government needs to take serious measures for the housing shortage. According to the Institute of Applied Economic Research, the state needs 5.24 million more homes.

3. This photograph was taken when the Confederation Cup tournament was hosted by Brazil in the previous year.

While at one side the attendees walk by, a woman sits and fishes out food in a garbage bin.  The photo was given the description of “the two faces of Brazil”.

4. This street art by A. Signl and B. Shanti from the German artist collective “Captain Borderline” shows the consequences of the big event, that for the sake of it many residential areas were demolished, leaving numerous people homeless.

It was put up “across the street” from police station in Rio de Janeiro because it was an ideal positron for onlookers to reflect upon it.

Another great mural by A. Signl and B. Shanti shows the FIFA 2014 trophy altered in a way to show the huge burden of the event on the masses and the working class. This one was painted in the buildings of Rio’s city centre.

The photograph shows masked protestors holding a banner that asks ‘who’d benefit from the World Cup’? The protestors blocked a street on June 16th in Curitiba, Brazil soon after the matches commenced.

This performer protests against the deaths of many workers who died while working on the stadiums and honours them by raising the flag covered in fake blood.

The picture that reads, “Red Card To Child Labour’, was a campaign by International Labour Organisation and did not intend to target the World Cup 2014 rather it was seeking to raise awareness for the child labour.

About 168 million children are subjected to child labour and according to UNICEF representative Gary Stahl, out of those 3 million work in Brazil.

Families protest in a slum against the unfair allocation of funds in the public services.

A protestor wearing the Brazilian flag goes by the Brazilian Congress as police and guards stand by in June, 2013. The protest deemed to be one of the severest demanded the government to allocate 10% of the country’s GDP on education.

The protests were fueled by corruption, high fares, taxation as well as huge investment in the World Cup.