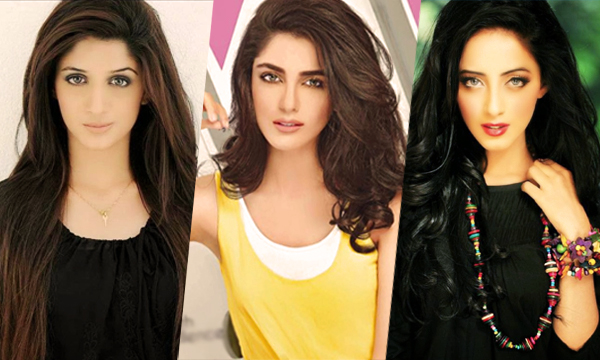 Pakistan is full of talent in diverse fields and various genres. It is not surprising to see our stars reaching new heights every day. This star-studded industry has seen some very amazing artists and it has the sole power to make or break them.

While we all have been crazily following the new upcoming Pakistani talent, there are some new entrants in the market who are here to stay.

Therefore, Brandsynario has compiled a list of 10 most promising female stars of the Pakistani entertainment industry. Have a look:

You absolutely guessed it right! She is the gorgeous girl who played the role of Saman in one of 2015’s most awaited movie Bin Roye.

Starting her career as a model and acting as a hobby, Khan in no time could be seen not just as a face of most powerful brands but also as one of the most competent and promising new face in the Pakistani film industry.

By far 2015 has been the most promising year of the very young and talented Sohai who has been fortunate enough to appear in two biggest movies released this year; namely Wrong No. and Jawani Phir Nahi Ani.

Her outstanding performance in the song ‘Fair and Lovely ka Jalwa’ made her standout from the rest of the most experienced costars which is a big achievement in itself!

Although Mawra has given great hits in the drama industry, but what particularly made her popular is the news of debuting in Bollywood movie Sanam Teri Kasam which is expected to be released in February 2016.

She performed as a theater artist before working as a VJ at ARY Musik. Mawra gained popularity through performing in Pakistani television serial dramas like Aahista Aahista, Ik Tamanna Lahasil Si and Nikhar Gaye Gulab Sare.

Rumor has it that she has further signed two more Bollywood movies this year. Her recent bold stance taken in favor of the controversial movie Phantom made her the most talked about celebrity on social media.

Maya Ali is the perfect example of the VJ turned superstar!  She has worked as a video jockey atSAMAA TV, Waqt News and Dunya News.

Both of these roles required a completely different approach however Maya has been successful enough to impress the audience for both of her roles!

Hareem Farooq started her career with theater, playing the lead role of Fatima Jinnah in Pawnay 14 August and Kiran in Aangan Terha.

The following year, she made her screen debut with a leading role in the 2013 horror thriller film Siyaah, which earned her a nomination at Lux Style Award for Best Actress.

Ayesha Omer shot to fame in 2015 as the ‘Tutti Fruity’ item girl. Her performance on song went viral and she faced a lot of backlash for it.

Omer started her career as a model. She has done many commercials such as Kurkure, Harpic, Capri, Pantene and Zong. Omer first hosted the show Meray Bachpan Kay Din on PTV at the age of eight.

Ayesha is known for her role as Khoobsurat in Bulbulay, Natasha in Ladies Park and Sara in Zindagi Gulzar Hai.

Ayesha is all currently filming for the upcoming movies ‘Yalghaar’ and ‘Waar 2’, both of which will also feature Shaan Shahid.

Sanam Chaudhry is best known for her drama serial Aasmanon Pay Likha (2013), which earned her critical acclaim and recognition. Her performance in soap-series was Bhool was widely praised for which she was nominated at 3rd Hum Awards as Best Soap Actress.

Sanam is the younger sister of Pakistani actress Zaib Chaudhry. Some of the dramas she has acted in include Ishq Humari Galiyoon Mein, Saheliyaan & Naqaab

Ushna Shah is a Canadian-born Pakistani actress, RJ and host. She began her acting career in the drama serial Khudgarz. She hosted a radio show in Canada called Saanjha Aasmaan on Radio Punjab.

Ushna has appeared in a number of TV dramas, most noticeably in HUM TV’s Bashar Momin and Geo’s Dua.

She is currently shooting for a movie ‘Afrah Tafreeh’ – it is yet to be known whether this will be another telefilm or a commercial movie.

Pakistani actress & singer, Rahmah Ali is known for her role of Sonia in the 2011 A-Plus Entertainment’s Nail Polish and for her song “Nadiya” of Coke Studio Pakistan (Season 7).

She is the sister of popular model and actress Iman Ali. Her recent drama serials include Nazdeekiyan on ARY Digital, Raja Indar on ARY Zindagi and Mol on HUM TV.

Sumbul is currently being seen in television serials at different TV channels. She is well known for her lead roles in Raju Rocket, Roag and Meray Khwab Raiza Raiza. Sumbul Iqbal is currently working in HUM TV serial Neelum Kinarey.

She also has worked in some plays like Babu Jee Dheeray Chalna and Bhaag Bhari – Neeli Chhatri on Geo TV and ARY Digital respectively.

Did we miss anyone? Let us know in the comments below!