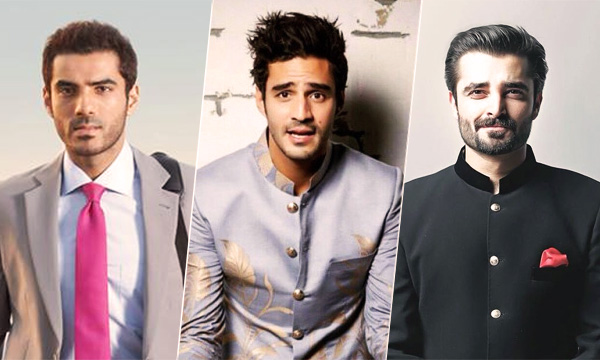 Pakistan is full of talent in diverse fields and various genres. It is not surprising to see our stars reaching new heights every day. This star-studded industry has seen some very amazing artists and it has the sole power to make or break them.

While we all have been crazily following the new upcoming Pakistani talent, there are some new entrants in the market who are here to stay. Therefore, Brandsynario has compiled the list of 10 most promising male stars of the Pakistani Industry in 2015. Have a look:

Also known as the Pyarey Afzal, Hamza Ali Abbasi is the newest crush of the girls not only in Pakistan but in India as well. The dashing actor was much loved for his role in the movie, Jawani Phir Nahi Aani. Albeit, he is a little too vocal and active on social media. The actor has been on the rise for quite some time and we can see him going further in the future as well.

Sammi Meri Waar singer, Umair Jaswal, was criticized a lot for his dance during the song. However, the hatred soon turned into love as the people realized what a gem he is to our country. Jaswal’s voice is fresh and energetic and he brings energy to almost everything he does. We can’t wait to hear more from his side.

Well-known for his debut in Sadqay Tumharey, Adnan is a face to remember. With the impeccable facial features and the killer smile, I am pretty sure the guy can win hearts with his looks only. His acting is the a cherry on the cake. Adnan also bagged various awards for his on-screen performance in different ceremonies.

A chef and an actor, Sikander Rizvi, who recently did a comedy role in the film Dekh Magar Pyaar Sey alongside Humaima Malik, is yet another hottie that Pakistan is proud to have. Owning a popular cafe in Karachi – Xander’s, Sikander is also a part of the upcoming thriller ‘Yalghaar’.

Son of the famous Javed Shaikh, Shahzad has been acknowledged for his role in the movie Karachi Se Lahore and hit drama Annie Ki Aye gi Baraat. He started his career back in 2011 from the small screen and made his way upwards due to his skills and talent. And his good looks of course!

A Pakistani-American actor and filmmaker, Shaz Khan, was featured in the amazing movie Moor in 2015. Shaz started his career in New York by acting in independent movies and plays and getting his MFA in Acting from the Actors Studio Drama School. Currently working on his feature debut as a director on Circumference (A Desi Story), he will be appearing in acclaimed director Mehreen Jabbar’s feature Dobara Phir Se in 2016.

Known for being an all-rounder, Mohsin Abbas is an actor, singer, writer, and a host. Before moving to Karachi to give a go to his acting career, he was an RJ in Faisalabad. In 2014, he appeared in ‘Na Maloom Afraad’ as Moon and was able to win hearts.

Sheheryar Munawar, also known as Sherry, is the latest addition to the hottest actors in Pakistan list. After graduating in Finance, he has been a part of major sensations in the drama industry like ‘Meray Dard Ko Jo Zubaan Miley’ and ‘Tanhaiyan Naye Silsilay’. His latest most-talked about the venture is with the director Asim Raza in the movie ‘Ho Mann Jahaan’. I, for one, cannot wait for the movie to release.

Adeel Hussain, like Sherry, started is career from drama serials and made his way to the big screen. He is also one of the main actors in the film ‘Ho Mann Jahan’ alongside Mahira Khan and Sheheryar Munawar. This movie is full of eye-candies.

The winner of the Best Male Model for HUM Awards in 2014, Shehzad Noor is what you call a ‘conventional hottie’. With his heavy build, dark eyes and floppy hair, I can’t help but drool over his pictures.

Do you have a favorite yet? Let us know in the comments below!