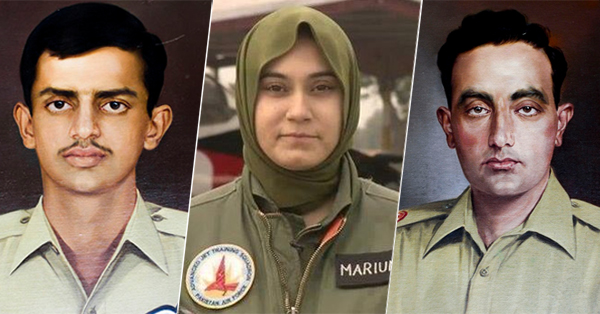 This article is neither a war chronology nor an inclusive analysis of the 1965 war between the two neighbors i.e. India-the aggressor and Pakistan-the defender. It is, rather, a tribute to those who sacrificed their lives for the freedom of their motherland. They are undoubtedly our heroes even though many went unnoticed but some of them found their way into history books and are even remembered today with great pride, respect, and admiration.

The date ‘September 6’ brings a sense of commitment to all Pakistanis that our motherland is our pride and we have a very special place for all our heroes in our hearts who give up their lives to make Pakistan lives forever.

During the Kashmir Operations soon after the birth of Pakistan, as a Company Commander in the 2nd Battalion of the Punjab Regiment, Captain Muhammad Sarwar launched an attack causing heavy casualties against a strongly fortified enemy position in the Uri Sector under heavy machine-gun, grenade and mortar fire. 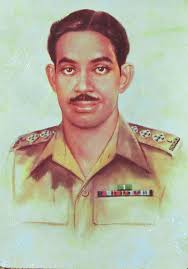 But on 27 July 1948, as he moved forward with six of his men to cut their way through a barbed wire barrier, he got martyrdom when his chest was hit by a burst of automatic fire. Captain Sarwar was awarded the Nishan-e-Haider , Pakistan’s Highest Military Award (posthumously).

During the course of action, despite being hit on his chest by Arty fire, Janjua retained his position and frustrated the Indian assault. Due to severe injuries, he embraced Martyrdom on 26 October 1948.

On 14th March 1949, the Defence Council of Azad Jammu & Kashmir adorned him with Hilal-e-Kashmir (posthumous) and on 30th November 1995 Government of Pakistan initiated the gazette notification to declare his Hilal-e-Kashmir equivalent to Nishan-e Haider.

In August 1958, Major Tufail Muhammad, a Company Commander in the East Pakistan Rifles, and his patrol encircled an Indian post in the Lakshmirpur area. And, though mortally wounded in the hand-to-hand encounter that followed, Major Tufail Muhammad continued to lead his troops till the Indians were driven out, leaving four dead and three prisoners. 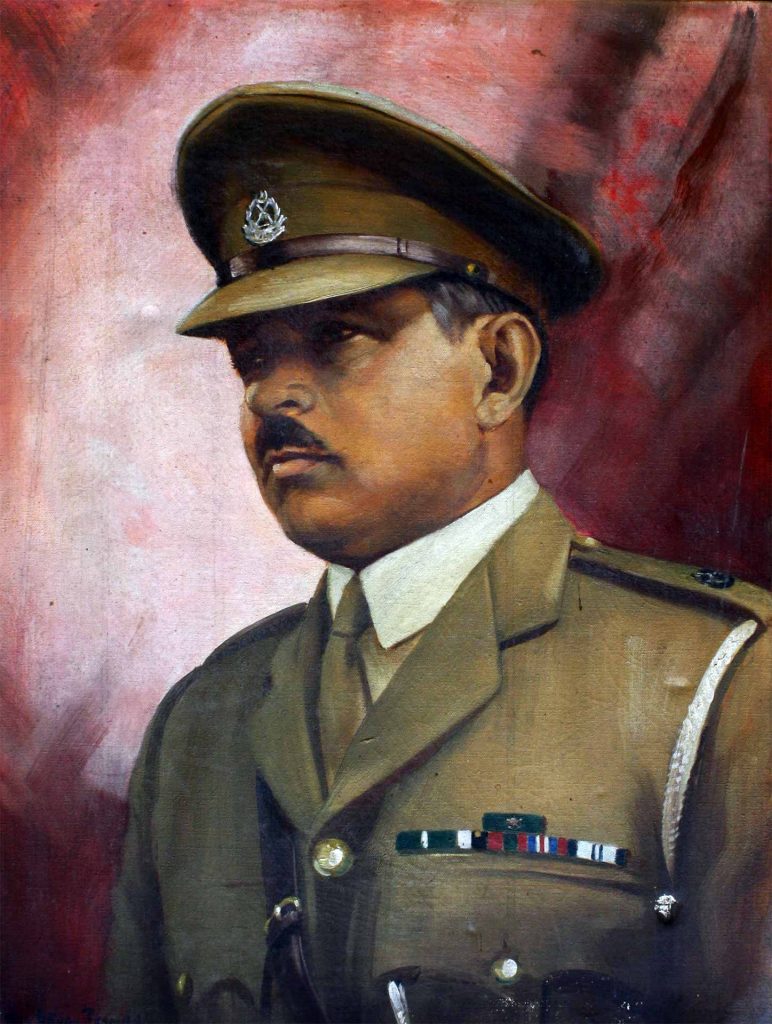 He embraced martyrdom the same day i.e. 7 August 1958. He was the second recipient of the Highest Military Award of Pakistan (posthumously).

On 6 September 1965, as a Company Commander in the Burki area of the Lahore sector, Major Raja Aziz Bhatti chose to stay with his forward platoon under incessant artillery and tank attacks for five days and nights in the defence of the strategic BRB Canal. 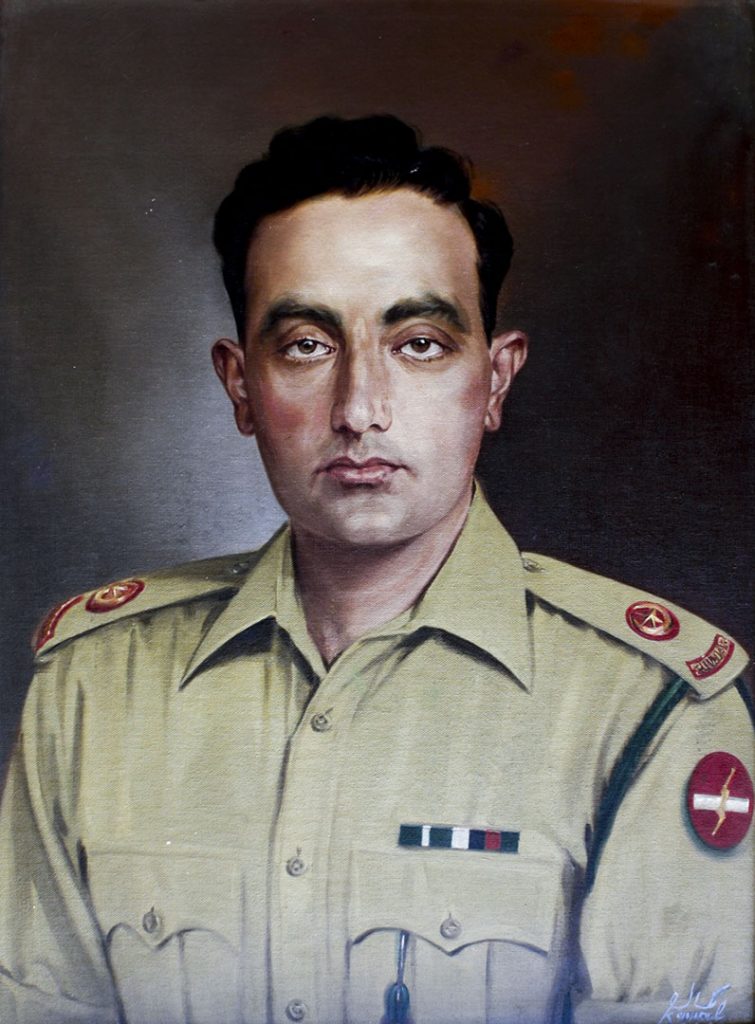 Throughout, undaunted by constant fire from enemy small arms, tanks and artillery, he organized the defence of the canal, directing his men to answer the fire until he was hit by an enemy tank shell and embraced martyrdom on 10 September 1965.

Commissioned as a pilot in the Pakistan Air Force in 1971, Rashid Minhas was taxiing for take-off on a routine training flight when an Instructor Pilot forced his way into the rear cockpit, seized control of the aircraft and took off. When Rashid Minhas realized that the absconding pilot was heading towards India, he tried to regain control of the plane but was unable to do so. 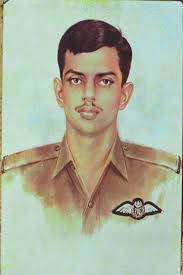 Knowing that it meant certain death, he damaged the controls and forced the aircraft to crash thirty-two miles short of the border on 20 August 1971.

As commander of a company of 6 Frontier Force Regiment, Major Shabbir was ordered in December 1971 to capture high ground near Sulemanki Headworks defended by more than a company of the Assam Regiment supported by a squadron of tanks. 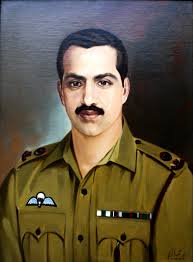 In a well organized superhuman action, for the next three days and nights after crossing a minefield and massive obstacles and killing forty-three soldiers and destroying four tanks, Major Sharif and his men held two enemy battalions at bay. But after he took over an anti-tank gun from his gunner in an attack he embraced martyrdom by a direct hit in the afternoon of 6 December 1971.

Sawar Muhammad Hussain had the distinction of being the first Jawan (a rank of the foot soldier in Pakistan Army) to be awarded the highest award Nishan-e-Haider for his gallantry. Although only a driver in the 20th Lancers, when war broke out in 1971, he took an active part in every battle. 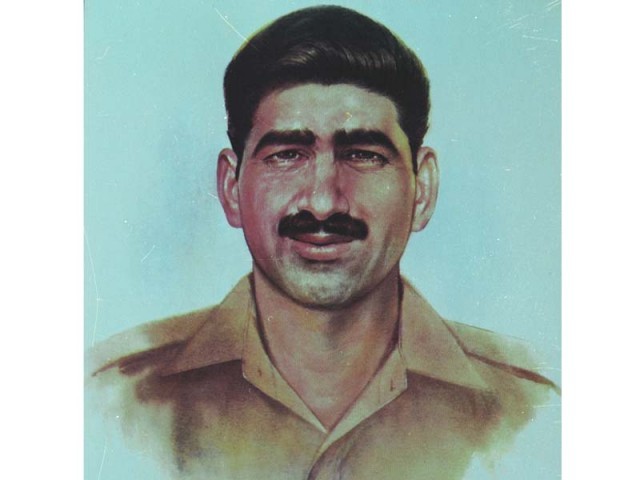 When he spotted the enemy close to a minefield near the village of Harar Khurd in December 1971, on his own initiative he directed accurate fire at the enemy resulting in the destruction of sixteen enemy tanks. But while directing fire from recoilless rifles, he was hit in the chest by a burst of machine-gun fire and embraced martyrdom on 10 December 1971.

Major Muhammad Akram and a company of 4 Frontier Force Regiment, which he commanded in the forward area in Hilli district, in East Pakistan in 1971, came under incessant air, artillery and armor attacks. 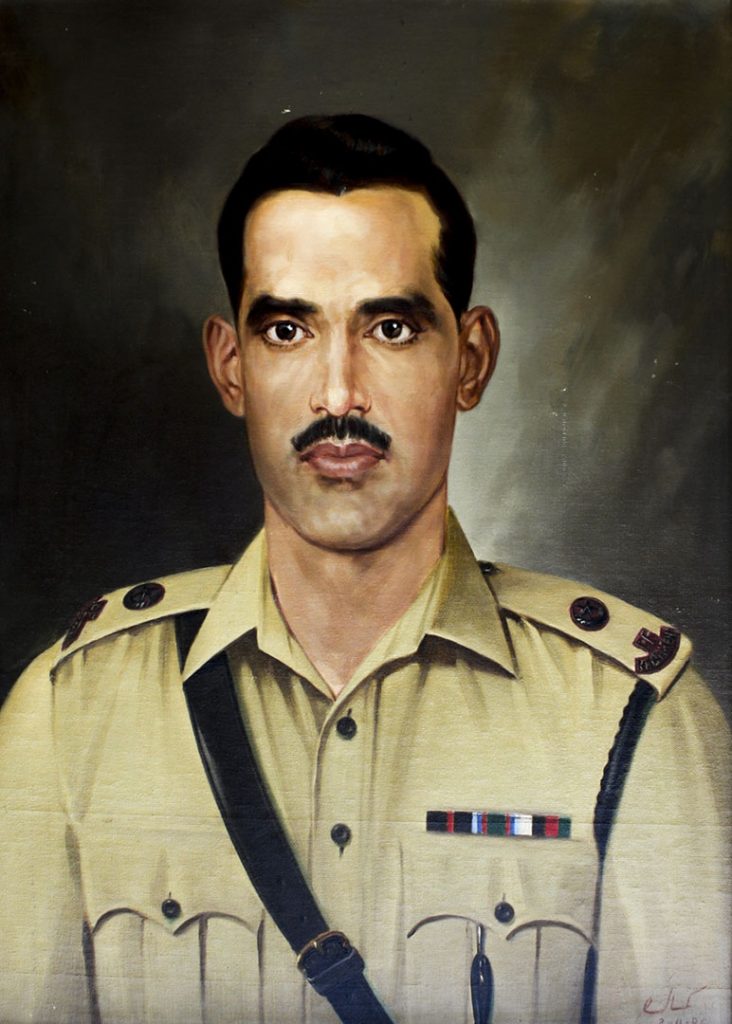 But for an entire fortnight, despite enemy superiority in both numbers and fire power, he and his men repulsed every attack, inflicting heavy casualties on the enemy. Major Akram embraced martyrdom during this epic battle on 5 December 1971.

Lance Naik Mahfuz was deployed on the Wagah-Attari Sector during the war in 1971 where his company was pinned down by unceasing frontal and crossfire from automatic weapons. Although his machine gun was destroyed by an enemy shell, he advanced towards an enemy bunker whose automatic fire had inflicted heavy casualties. 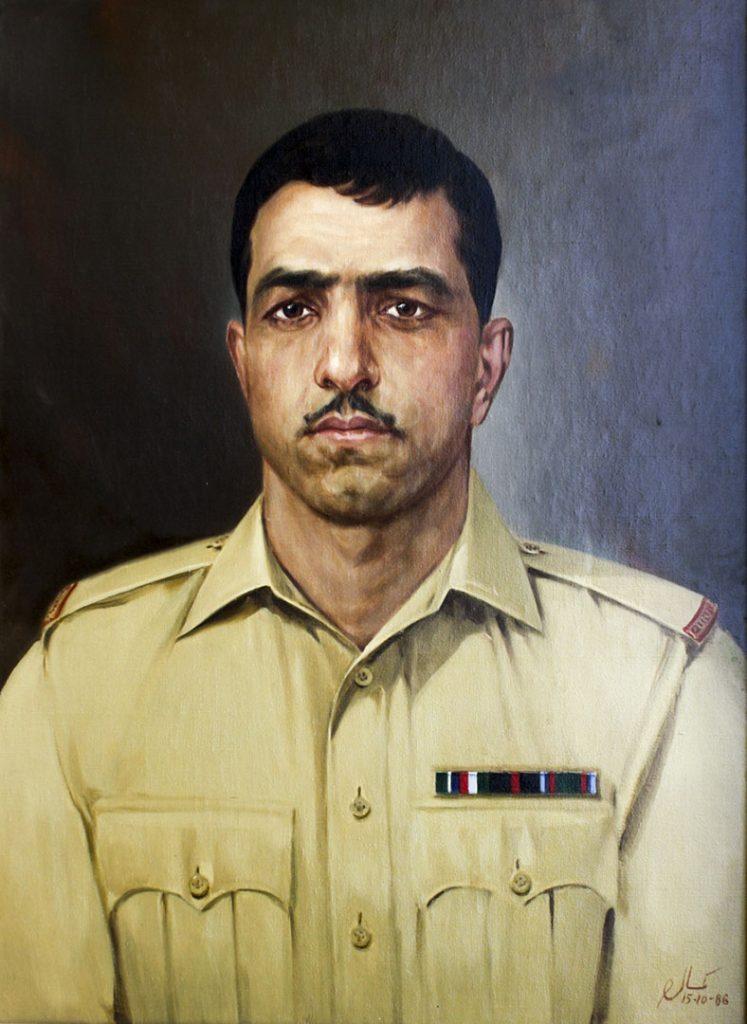 Even though wounded in both legs by shell splinters, when he reached the bunker he stood up and pounced on the enemy, in the encounter he was hit with a bayonet. Although unarmed, he got hold of the enemy and did another bayonet strangling with him. Due to serious injuries, he embraced martyrdom on the night of 17 December 1971.

Captain Sher Khan emerged as the symbol of mettle and courage during the Kargil conflict on the Line of Control. He set personal examples of bravery and inflicted heavy losses on the enemy. He defended the five strategic posts, which he established with his jawans at the height of 17,000 feet at Gultary, and repulsed many Indian attacks. 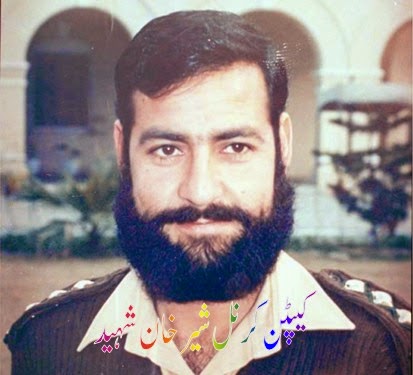 After many abortive attempts, the Indians on 5 July 1999 ringed the posts of Captain Karnal Sher Khan with the help of two battalions and unleashed heavy mortar fire and managed to capture some part of one of his posts. Despite facing all odds, he led a counter-attack and re-captured the lost parts of his post. But during the course, he was hit by the machine-gun fire and embraced martyrdom at the same post.

Lalak Jan belonged to the Northern Light Infantry Regiment of Pak Army. He fought from the forefront to thwart heavy Indian attacks. He volunteered himself to be deployed on the front positions located at the jagged peak in May 1999. Havaldar Lalak Jan repulsed back many aggressive ventures by the enemy and imposed colossal losses on them. 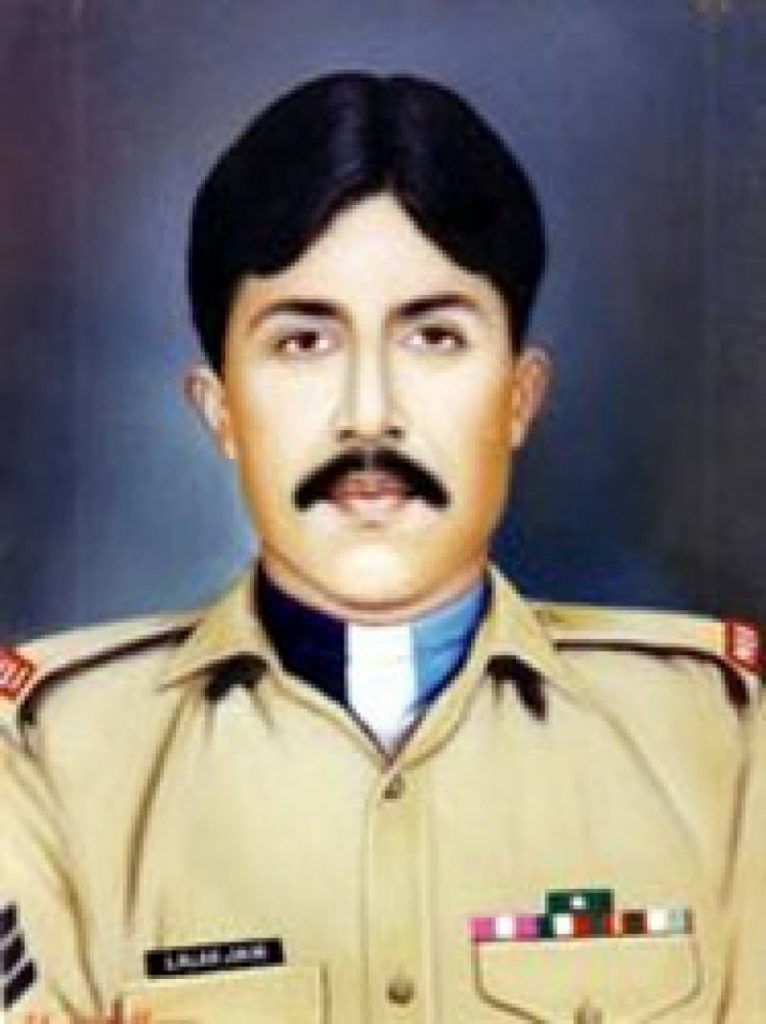 On 7 July 1999, Lalak sustained serious injuries as enemies pounded the area with heavy mortar shells. But despite being injured, he retained his position and frustrated the Indian assault. Due to severe injuries, he embraced martyrdom.

Marium Mukhtar is Pakistan’s first and only female fighter pilot to die in the line of duty. She died after a Pakistan Air Force (PAF) FT-7PG aircraft crashed on November 24, 2015. According to PAF, the FT-7PG was being flown by Squadron Leader Saqib Abbasi and co-pilot Flying Officer Mariam Mukhtar.  She got injuries in the accident and did not survive from her injuries. 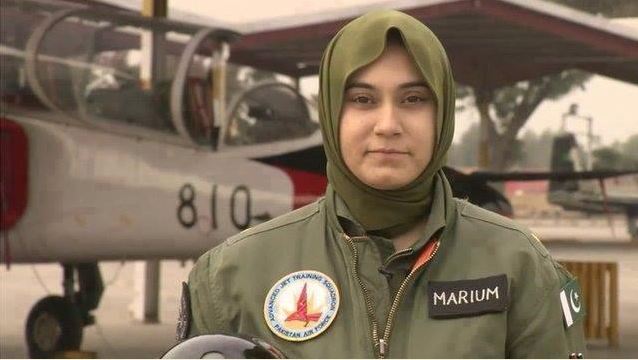 Ensuring safety of life and property of civilian population on ground, both the pilots ejected and the aircraft crashed near Kundian, Mianwali [Punjab, Pakistan]. The Pakistan Senate Standing Committee on Defence (SSCD) recommended Marium for a state award. She has been awarded the military award Tamgha-e-Basalat by the Government of Pakistan.