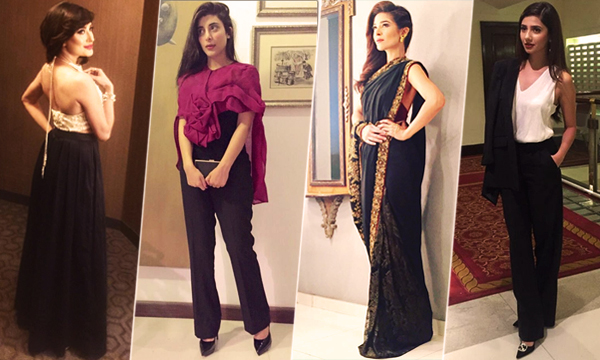 Trendy, chic and glamorous – these Pakistani celebrity fashionistas in all their sartorial glory have left us awestruck at every appearance, on and off screen both. What once was only supermodels’ forte has fast been adopted by celebrity actresses too. From ramps to red carpets, Pakistani actresses have upped their fashion game and mesmerized us with their resplendent spectacles at every occasion.

The Bin Roye star never gets it wrong.

From draping the sleek saris for movie premiers to donning the edgy pant suit for more formal events, the fashionista pulls off each look with utter ease.

Usually seen sporting attires from her bestie, designer Feeha Jamshed’s collection, Mahira Khan has proven time and again that she is well and truly ruling the local fashion game.

Once styled locally by the A Wardrobe Affair duo, Anber and Marya Javed, Mawra Hocane’s latest looks are more credited to Indian stylist, Payal. Hocane recently made waves on social networks for ditching her bubbly look and donning the racy red choli for her upcoming movie.

Having recently stunned the audience with her seductive avatar as Tutti Fruitti in ‘Karachi Se Lahore’, the sizzling actress continues to leave us awestruck with her trendy appearances left, right and center.

We have always loved her simple eastern attires in Bulbulay, but the vivacious actress’s recent red carpet appearances have proven her as the ultimate style icon of Pakistan.

Most recently seen as the showstopper for Ali Xeeshan’s latest bridal collection, the Wrong No. actress has quickly upped her fashion game with her fast entry into the Pakistani film industry.

Another picture of the beautiful Sohai Ali Abro @sohaialiabroofficial wearing our green overlap hourglass dress! She is carrying it so effortlessly! #feehajamshed #FJ #sohaialiabro #style #fashion

Crediting some of her looks to Tabesh Khoja of N-Pro, the Fair and Lovely’s Jalwa star looks more ravishing with each new look.

In spite of the recent dip in her acting career, the sultry star looks as stunning as ever.

Recently featured in the British Vogue, the Dekh Magar Pyar Se actress has come a long way since her first showstopper appearance for Deepak Perwani at the young age of just 14 years!

With her chic, minimalistic style, Urwa Hocane never fails to impress us with her fashion ensembles.

From the relished ghagra cholis for the bridal week to the simple shalwar kameez for Eid to the ravishing, backless numbers for award shows, the VJ turned actress is always fashionably on-point! With a weakness for Louboutins, the young star strikes the perfect balance of comfort and style with her outfits.

Do you know your favorite stars Urwa Hocane, Farhan Saeed are Nominated For Lux Style Awards 2015?

The dewy-faced Afghan beauty continues to mesmerize us all not only with her acting talent but her effortlessly gorgeous good looks too.

From the bubbly Sajjal in Mehndi almost 15 years ago, Aisha Khan has well and truly risen to stardom. Be it her dupatta clad characters or her upcoming draconian Kubra role, Aisha Khan pulls off all ensembles stunningly.

Mehwish Hayat Khan has literally transformed herself since her debut as a shy, introvert girl in TV dramas to the ravishing, bold Billi recently gracing the cinema screens.

The actress/model with her charming good looks and impeccable style breathes life into whatever she wears!

P.S. we absolutely love the side fringe look she is rocking nowadays for Jawani Phir Nahi Ani promotions!

The newly turned mom, Sarwat Gilani is back already and looking as ravishing as ever!

About last night. #SarwatGillani wore a #SaniaMaskatiya outfit to the premiere of #JPNA

Pakistan’s very own superwoman, Nadia Hussain is yet another Pakistani fashionista we love following!

From running her successful salon spa to gracing the VSM2015 finale with her presence, the statuesque beauty dons every attire with utter poise. Mommy to four kids, the model turned actress wears sleek pantsuits and graceful flowing gowns all with equal ease.

Follow their profiles on social media and feast your eyes just by looking at these mannequin-like beauties.

Do you have any other name on your mind? Let us know by commenting below!