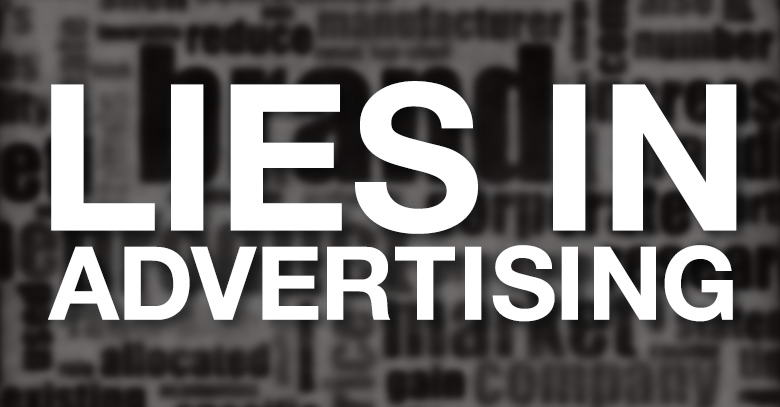 By Hassan Wasti
If being a marketing enthusiast has taught me anything, it is to not trust advertisers because they can go to any lengths to sell a product. Be it the claims of getting one ‘girlfriends’ by using AXE or suddenly developing a taste for danger after drinking Dew; advertisers always go one step ahead to make sure that their product appeals to the consumers in the most unique fashion.

Just to be clear I have used AXE countless times and have developed a regular taste for Mountain Dew; needless to say that I have been disappointed on both accounts.

Sadly we have become so blind to these gimmicks or, in advertising terms, puffery that we accept even the most intellect-defying advertisements presented to us.

Let’s look into top ten lies that have been fed into our minds through advertising.

Most of us by now have understood that in the marketing game, names can be misleading, words like ‘deluxe’, ‘Premium’ or ‘Royal’ usually mean “anything but”.

For example the heavily marketed Mcdonald’s Arch Deluxe for adults which turned out to be a greasy burger patty and nothing more. The only thing “Deluxe” about it was the increasing waistline that the customers got after munching down this meal.

Resorts might showcase a crowded hot tub as a “luxurious spa area”, or an auto mechanic might describe a tile floor waiting room with a couple of desk chairs and a coffee maker from 2002 as “our VIP suite.” Those aren’t blatant lies, but they are certainly misleading. (Still waiting on that bottle service I ordered last time I had my oil changed.)

Playing around with words is one of the few tricks that marketers learn in business schools. Adding words like ‘low fat’ or ‘light’ have done wonders for many products.

Interestingly a study carried out by consumer group showed that the health difference between “light” and regular options was almost nonexistent.

Statistics are always a good read; we readily deem any product authentic that provides a research to back its claim of being the best. Well here is one study that ridicules our naivety on such occasions.

A study conducted by the University of Pennsylvania showed that two out of every three brands fabricate their research when advertising their products.

Many brands such as Head and shoulders claim a 100 % removal of dandruff with 95% reduction in hair fall. Nothing is 100% and taking a sample from 20 odd existing users of your product to arrive at the 100% valuation does not count as an authentic survey.

They’ve been fooling consumers for years and the poor chunk are still thinking that one day (don’t know which) but one day, they’ll be free of dandruff completely. Twisting these facts and figures influence the whole industry.

3. Experts know what they are talking about

Most of us are mature enough to admit that we don’t know everything that is why we look at experts to enlighten us with knowledge that is latent to us. It sounds convenient except that most of the “experts” are not-so-believable people.

For a long time, hygiene brands have boasted about how their products are No. 1 recommended choice by the doctors. Name any household soap be it Lifebuoy, Safeguard or Dettol and look up their statistics; every soap has its own set of doctors that claim it is the best.

With such a backing from qualified professionals who can deny the authenticity of these brands except when one figure out how much these doctors are paid to recommend these soaps their credibility doesn’t amount to much.

They say that ‘A picture is worth a thousand words’ and how true they are, pictures do deliver the message more eloquently than words however our advertisers seem to take this statement a little too seriously.

Ads depict images that often turn out to be 360 degrees opposite of what the reality is. The current example of KFC’s Double Decker advertisement which shows a towering burger filled with mouth watering chicken and the words “Eat Big” plastered all over it.

Well I have to admit KFC seem to have improved on their photography skills and their Photoshop software does seem upgraded but that’s about it, because whatever it is shown in the picture is not what you get at KFC.

5. It Really Does What it says it Does

This one is really amusing, brands do get a real laugh when drawing up what their products are capable of doing even they don’t believe the half of it.

Take a long look at Pantene and its range of conditioners which boasts of giving silky smooth and shiny hair. Well Katrina Kaif may flaunt her shiny smooth hair in the commercials for Pantene but no matter how many bottles of Conditioners one empties out on their head, it is close to impossible to get that shine.

People in our local market are always impressed by big names and international brands but often get duped by the fact that all that glitters is not gold. Brands which often pose as luxury brands in one country are mostly considered average in another country.

Retailers like Wal-Mart which is an international brand and has a elite standing in countries like India is considered a brand for middle or lower middle class in USA.

Another perception that we have adopted is that global brands are better than the local ones. A man from the average income household is bound to select a local brand like Omore over Walls and here’s a kicker, Omore is often considered better than Walls in many aspects.

This all takes a weird twist when you read about the Pepsi vs. Coke challenge. Blind tasters over and over again named Pepsi the better drink—until they were told it was Pepsi, whereupon they changed their minds.

Fascinated, scientists conducted a brain scan and concluded that the tasters were telling the truth about their enjoyment levels. Pepsi really did start tasting bad once people knew what it was.

Brands create a dilemma which transforms consumer products into lifestyle choices. Suddenly you just don’t drink Coke you become “Coke drinkers”, and your drink choice is merely an extension of yourself.

9. Choice is a good thing

The central belief of advertising is that choice is a good thing. Not only is it common sense but is backed by many studies. Take ‘Choice’ out of the equation and you are left with a cold world full of desperate people, which is why consumerism is such a blessing.

But it so happens that our consumer paradise isn’t doing us lot of favors either. Faced with many options we stress about choosing which one is the right fit for us, fearing we might make the wrong decision we find ourselves in a constant state of anxiety.

A study offering participants chocolate from a box of six and a box of thirty showed that people with less choice were satisfied more as compared to those who were given the box of thirty chocolates.

Other studies show similar results when people are faced with speed dating and selecting pension plans, it seems our brain freaks out when given too many choices leaving us dissatisfied and unhappy.

Well this is the final nail in the coffin. After countless lies and deceptive advertisements it all comes down to how much we spend and, we do like to spend, don’t we?

The consumer culture that we live in is a result of our brain decaying away instead of being in a state of oblivion due to lots of shopping options.

Yet marketers keep pursuing the myth of the “happy shopper,” because if that were to collapse, consumer culture in its entirety would come crashing down.