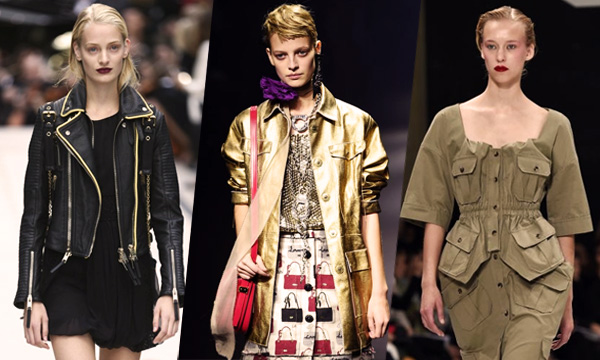 With spring just around the corner, it’s time to think about updating winter wardrobes with lighter looks. Here’s a rundown of the season’s ten biggest trends, based on the key garments, fabrics, cuts and styles spotted on the catwalks for spring/summer 2016.

Winter’s must-have fabric will be hanging on as a major look for spring. Leather will be everywhere this season, with skirts, dresses, jackets and even tops in a wide choice of colors, from dark shades to vibrant brights. Trussardi brought a long yellow leather dress to the SS16 runway, while leather jackets — especially biker jackets — were hot news at Burberry Prorsum, Each & Other and Vionnet. Barbara Bui rocked leather trousers in black and pink.

Sheer fabrics are a key trend for spring/summer 2016, with soft, sensual looks that suggest rather than show, subtly revealing only certain parts of the body. This was a major theme for Givenchy. Models on the Nina Ricci, Missoni and Akris runways were topless but for a dark, sheer veil of fabric.

There’s no single stand-out color trend for this season. Brands brought a wide range of shades to the SS16 catwalks, from vivid hues (candy pink at Emporio Armani, almost fluorescent colors at Polo Ralph Lauren) to pastel shades, which were popular with almost all labels. Autumnal tones were spotted too, with camel and gray at Daks, as well as black and white combos at DKNY, Costume National, Margiela, Carven and Balenciaga.

However, one noticeably popular color for the season is silver, with Iceberg, Jeremy Scott, Loewe and Iris Van Herpen showing this metallic shade in matte or iridescent versions.

While some labels rocked sailor chic — an ideal look for spring/summer — most opted for multi-colored stripes in sometimes psychedelic combinations. Whether vertical or horizontal, wide or super-fine, stripes of all kinds were seen on summer dresses, skirts, tops and pants in catwalk collections from the likes of Missoni, Salvatore Ferragamo and Dolce & Gabbana. Max Mara splashed stripes in yellow and white, Rochas went for oversized bands and Issey Miyake turned lines into waves.

Designers brought cartoons, drawings, pop prints and quirky slogans to the most feminine of ensembles this season. Womenswear also gets a stylish yet romantic, carefree and bohemian vibe this season, with jumpsuits, skirts and dresses with long, floaty cuts, in light shades or powdery pastels. Last year’s fringing will be back in a big way for spring/summer 2016, with summer festivals offering strong inspiration for clothing and accessories. Key pieces will be finished in leather and, in particular, suede. MSGM, Roberto Cavalli, Carven, Balmain and Barbara Bui all brought fringes to various items in their womenswear collections. Balenciaga stood out from the crowd with fringed handbags. Blumarine also used flowers as a more discreet addition to its oversized pajamas. Paco Rabanne opted for a lingerie-inspired look, rocking underwear as outerwear with a sportswear feel.

Although less present on the spring/summer runways than for autumn/winter 2015, military detail will continue as a trend for spring. As well as details such as chains and double-breasted cuts, the military look brings khaki shades to this season’s collections, with army greens seen at Rochas, Guy Laroche and Chalayan. Note, however, that camouflage is nowhere to be seen this season.

While skirts keep legs at least partially covered this season, shorts are sure to show them off.