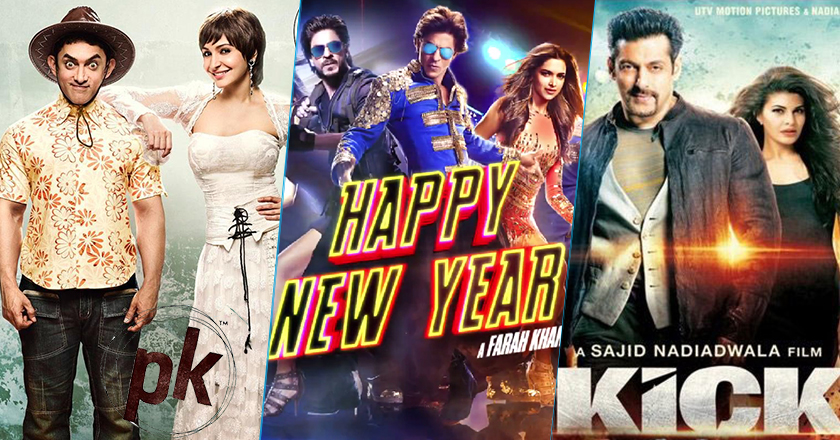 While the quality of commercial Bollywood movies may be declining by the day, there are still some of good qualities. The year 2014 too saw some great Bollywood storylines and some mindless entertainers worth watching. Here are the ten highest grosser for 2014:

A sort of tribute to blockbuster Dilwale Dulhaniya Le Jaenge, featuring the new comers Alia Bhatt and Varun Dhawan, Humpty Sharma ki Dulhaniya was quite a hit with the audience. Comedy with a predictable storyline, both the stars truly deserved all the appreciation they got for their performance in the movie. Released on 11th July 2014, the movie made a total box office collection of INR 76.81 crores.

Another Alia Bhatt starrer, 2 States was a movie about cultural differences, featuring Arjun Kapoor as the hero. The movie was an adaptation of the popular Chetan Bhagat novel of the same name. The romantic drama allowed both the stars to enter the 100 crore club for the first time, earning a total of INR 102.13 crores at the box office.

Featuring the chocolate hero, Siddharth Malhotra and the comedian, Ritesh Deshmukh, both as villains for the first time, Ek Villain was a surprise 100 crore club movie entry for many. The movie made INR 105.62 crores at the box office with Shraddha Kapoor as the heroine and many memorable songs.

Yet another action thriller by Akshay Kumar, Holiday did unexpectedly well at the box office. The movie directed by the mastermind behind Ghajini, AR Murugadoss, also featured Sonakshi Sinha as a professional boxer. Released on 6th June 104, the movie made INR 112.45 crores.

After the astounding success of Dabangg 2, Salman Khan came back in another one of family productions in 2014, Jai Ho. The movie, debuting Daisy Shah as the heroine, did not do as well as expected. The movie being Salman Khan’s next right after the Dabangg duo resulted in an exceptional opening though and managed to collect INR 116 crores in its lifetime.

The Ajay Devgan and Rohit Shetty duo tried to recreate the Singham magic on the silver screen with Singham Returns, featuring Kareena Kapoor, but failed to do as good as before. The movie met with a good opening due to its release on the Independence Day long weekend but lost its audience later gradually. The movie still managed to enter the 100 crore club, bagging INR 140.62 crore in total.

Hrithik Roshan starrer Bang Bang! was the most expensive movies created in Bollywood to date and while it managed to do quite well, it just missed the 200 crore mark. Also featuring Katrina Kaif, after their sizzling chemistry in Zindagi Na Milegi Dobara, the movie earned INR 181.03 crores, allowing the director Siddharth Anand to finally enter the big league. Shot beautifully with great Hrithik Roshan action sequences, the movie was an out and out hit with all.

After many previous successes, Shahrukh Khan and Deepika Padukone once again came together on screen to rule the box office with Happy New Year. Although, lacking in a good story, the movie still managed to do exceptionally well perhaps due to the stellar cast. Farah Khan’s latest directorial venture, also featuring Abhishek Bachan in a double role, Sonu Sood and Boman Irani, earned INR 203.3 crores in total. Kick Yet another Salman Khan entertainer,

made Sajid Nadiadwala the first director to enter the 200 crore club with his debut movie. A typical Salman Khan entertainer with oodles of action, drama and catchy songs, the movie featured Jacqueline Fernandes as the heroine. The movie broke many records and earned a total estimate of INR 232 crores.

Aamir Khan weaved his magic again with his latest release PK attracting audiences in mass to the cinemas. While the movie raised many controversies, the subject matter of the movie and flawless performances, by the perfectionist and co-star Anushka Sharma managed to make the movie a hit. The movie has already earned a whooping INR 256 crores, becoming the highest Bollywood grosser for the year 2014. It is yet to see if the movie manages to break Aamir Khan’s Dhoom 3 records and be the first to enter the ultimate 300 crore club.