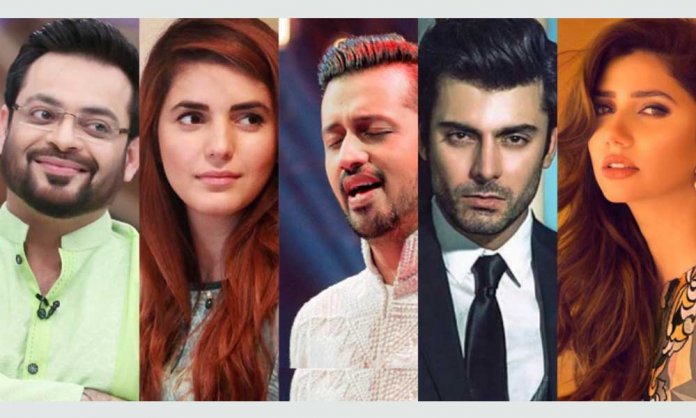 Instagram has undoubtedly become one of the major platforms that celebrities use to stay connected with their fans and keep them posted regarding their professional and personal lives. Be it movie announcements or engagement celebrations, all of it is documented through this medium.

Fans and followers keep a close check of these accounts and keeping that in mind, we’ve compiled the 10 most popular celeb posts that caught our attention this week.

1. When Mahira Khan showed the world that she’s a true Superstar

She penned a note to thank everyone who came out to support her following Firdous Jamal’s insensitive comments.

“I did not ask for it and that makes it even more special,” the superstar wrote.

We also feel the need to appreciate Mahira’s amazing handwriting. She truly is an artist!

We are the present. What we do and how we do it, is our future. Thank you to all those who have come out to support me- I did not ask for it and that makes it even more special. As an artist I am proud of my industry. I’m grateful to my senior artists for paving the way for people like me and so many others. I am also proud of myself. In this journey of mine, I can proudly say that I have done what I thought was right and never succumbed to what others thought was right for me. That – I will continue to do. InshAllah. In a world full of hate, let’s choose to love. Let’s be tolerant of other people’s opinions and let our fight be against the mindset -that a successful woman is a scary thought. No it isn’t. It’s a beautiful and empowering one. Let us stop picking on one another so that this industry and our country thrives like no other. I read somewhere that ‘Stardom’ in Latin means – thank you to the fans when it was lonely. Stardom it is then! Love and Gratitude, X

2. When Hamza Firdous stood by his father

Momina Duraid shared that her company, MD Productions will not work with Firdous Jamal due to his sexist comments. “We are ashamed of him for being a part of our fraternity”, she said.

Hamza Firdous responded to the post and started a hashtag in support of his father which started trending on social media.

The actor shared a picture and revealed that the two got engaged to each other in February.

“This picture is from our Baat Pakki event back in February. Usually, the exchange of rings as engagement is considered as an engagement, so I did that in front of everyone. But since you guys have begun to study my life as a subject, it reflects on how much time you all have,” cleared Yasir following the speculation.

4. When Feroze Khan announced that Khaani is now on Netflix

Co-star Sana Javed also displayed her excitement at the news.

“I can’t explain how genuinely honoured and blessed I am to receive such amazing support from all of you. It is because of your unwavering commitment and belief in my work that I have been able to reach this point today. Thank you for making this character so special.”

5. When Mehwish Hayat came out to support Hockey

Just like Pakistani cinema has been revived, sports in the country also need a revival, feels the Tamgha-e-Imtiaz recipient.

“Continuing our drive to get Pakistan Hockey to its former glory, visited an under 16 girls’ training camp in Sukkur. Heartened by what I saw. The passion for the sport is there in the young, just need to build on it. They are going to be making Pakistan proud one day,” shared Mehwish wanting a hockey revival in Pakistan.

Continuing our drive to get Pakistan Hockey to its former glory, visited an under 16 girls’ training camp in Sukkur. Heartened by what I saw. The passion for the sport is there in the young, just need to build on it. They are going to be making Pakistan proud one day!💪🏻 InshaAllah! 🇵🇰 #MehwishHayat #revivalofhockey #NationalGame 🏑#PakistanZindabad💚

All the best @danyalzee for your launch today. Finally after months of hard work! #ekaurek3

7. When Humayun Saeed thanked fans for appreciating the first teaser of his upcoming drama

“Thank you for showing so much love to the first teaser of Mere Paas Tum Ho,” wrote the actor and released a second one for the fans.

8. When Ahad Raza Mir just shared an intense picture of himself

Well, his picture is enough to break the internet and catch everyone’s attention. We cannot wait to see the actor in more upcoming projects.

10. When Imran Ashraf announced that Alif Allah aur Insaan will be re-playing soon on TV

The actor gained fame playing a trans character in Alif Allah Aur Insaan which you will be able to rewatch on your television screens.  “Shamoo the character actually opens a new way..For me and many newcomers…,” wrote Imran.

In case, you missed it last time, now is your chance to watch it.

Is there anything that we’ve missed? Comment and let us know!

Mansha Pasha Shares A Horrifying Incident Of Her Phone Blowing Up