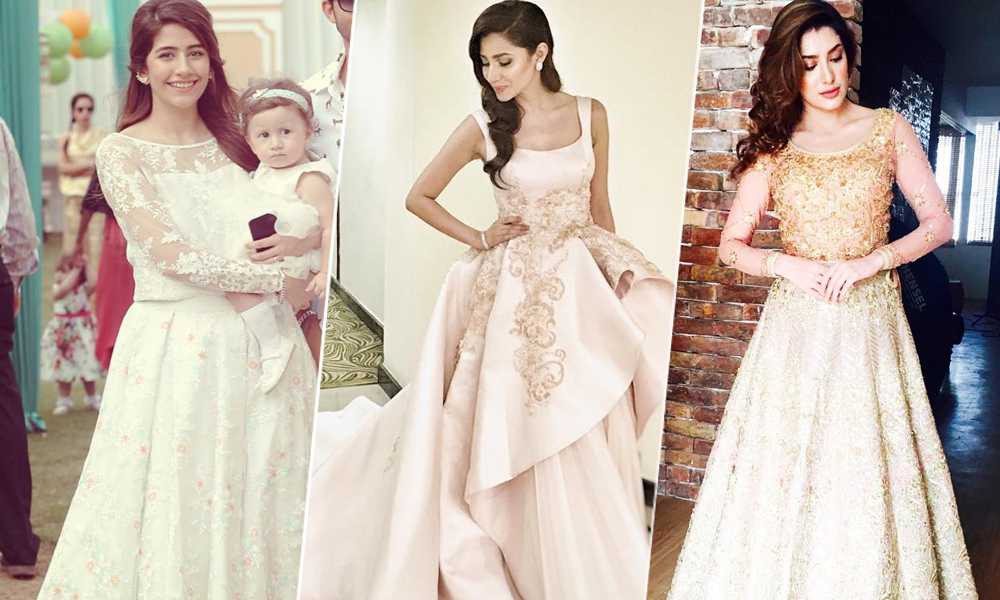 Celebrities are not only talented but also drop dead gorgeous. Their fashionable looks give us all serious dress envy and our paychecks are getting lighter by just staring at them in awe.

The style game of starlets is always on point and all girls want to own the timeless fashion pieces they flaunt so well!

For the Lux Style Awards this year Mahira Khan looked like an Eastern modern-day princess in this baby pink Shahira Lasheen ensemble. Completing her look with Kiran Fine jewelry and her hair side swept on her right shoulder, she looked absolutely breathtaking. As the designer of the dress, Thakoon Panichgul stated, that regardless of the sporty vibes of the dress it does have an aura of elegance to it which is definitely undeniable. Stone’s petite figure shines at the Met Gala in 2014, in this two-piece that can be easily mimicked by fans of this outfit. Syra always aces her style game with stellar outfits. At the first birthday party of her daughter, she sported a breath-taking white dress that was adorned with lace. She paired her dress with pretty pink heels, adding oomph to her dress all the more. Appearing on the front cover of FHM Pakistan magazine, Mehwish Hayat looked flawless in a Nomi Ansari intricately designed dress. She definitely looked like royalty in this glittery gold two-piece that matched with the coppery tones of her eye makeup. Embodying Cinderella, Claire Danes wore a dress identical to the Disney princess’ at the Met Gala this year, except there was one catch. This one-of-a-kind, handcrafted Zach Posen gown glowed in the dark! Made with organza and fiber optics, Claire literally lit up the room she stepped in. Known for her scandalous looks on the carpet, Rihanna stepped out of her usual antics in 2013 and no one could stop talking about it. Showing off her gorgeous features at the Grammys in this sheer, firetruck-red Azzedine Alaia flowy dress that is known to be one of her best looks ever. News of Momina Mustehsan’s engagement spread like wildfire. Later her engagement dress by Elan became the talk of the town instead. Breaking hearts of many, the singing sensation looked drop dead gorgeous in this heavily embroidered piece adorned with glittery jewels and matched wide-leg pants. Sonam Kapoor looks like a queen in this dress, with a train that is longer than life itself, designed by Ralph & Russo. This sari-inspired gown is quite the picture with gold detailing adding a little zing to the simple but chic piece. Pairing a statement choker in a pattern identical to the dress added to the sophistication of the dress. Don’t we all want to flaunt such a piece at least once in our lives? Angelina Jolie made waves in her Atelier Versace black velvet dress that she featured at the Academy Awards 2012. The wide slit displayed her long legs, adding a sultry effect, that she paired with Salvatore Ferragamo velvet peep-toes. This dress by Tena Durrani was one of the hits at the Lux Style Awards earlier this year and Ayesha Omar was able to add a dose of chicness to its simplicity. The gold embroidered with silver detailing was a contrast to the black simple skirt that was shorter in the front, showing off her Guiseppe Zanotti shoes. These dresses are certainly every girl’s dream come true and all these celebs can give us some inspiration as to how to wear similar pieces.

7 Pakistani Celebrities Who Are Style Icons