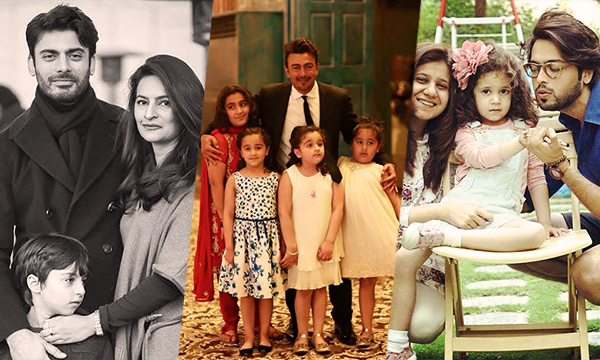 Pakistan’s entertainment industry is thriving and we love all our stars. Be it the Princely Fawad Khan or model Mehreen Syed, Pakistanis can’t get enough of their beloved celebrities. While you look for every possible detail about their perfect lives, Brandsynario provides all the interesting stories that can brighten your day.

Keeping in mind the fact that most fans want to know about their favourite celebrities’ marital status, we bring to you the most loved Pakistani celebrities with their picturesque families:

When he’s not being a cricket commentator Wasim Akram reminded us that he’s also a doting dad when he shared an adorable snap with his daughter Aiyla.

Jeeto Pakistan’s host has a super cute family which includes his wife Sana and their daughter, Fatima. Fahad Mustafa has gained a lot of fame because of his recent blockbuster ‘Na Maloom Afraad’.

Sofia, well known as Fia, is a young and talented actress and a model, who is well known for her work locally as well as internationally. She is married and has an adorable daughter named Aliyah. Aliyah looks like a model in the making.

Fawad Khan, the upcoming Bollywood star, married the love of his life, Sadaf, very early in his career and they together have a son as well. Fawad believes in old school romance and is very loyal to his wife. *Girls, cue the heartbreak*

Mahira Khan, an Urdu-speaking pathan with her to-die-for smile, is Pakistan’s sweetheart. She is a single mother who is trying to make her own unique space in this industry.

A versatile actor and producer, who is known for his work in different drama series, has been married thrice. And as we know, third time is the charm. He finally has his happily ever after with Sana, his third wife. They have a daughter named Aayat.

The Waar actor has a pretty cute family, even if we say so ourselves. Shaan along with his wife and his four daughters makes a picture perfect family.

Married in 2013, Mehreen is now a mother of a one-year-old baby and is quite contented with her life.

Pakistani Priyanka Chopra, Zhalay Sarhadi, is loved by her fans for her acting. She is also referred to as our local piggy chops because the similarities between the two actresses are striking. She tied the knot with Amir Anees and has a daughter named Anaya.

Know any more celebs to add to the list? Let us know in the comments below!